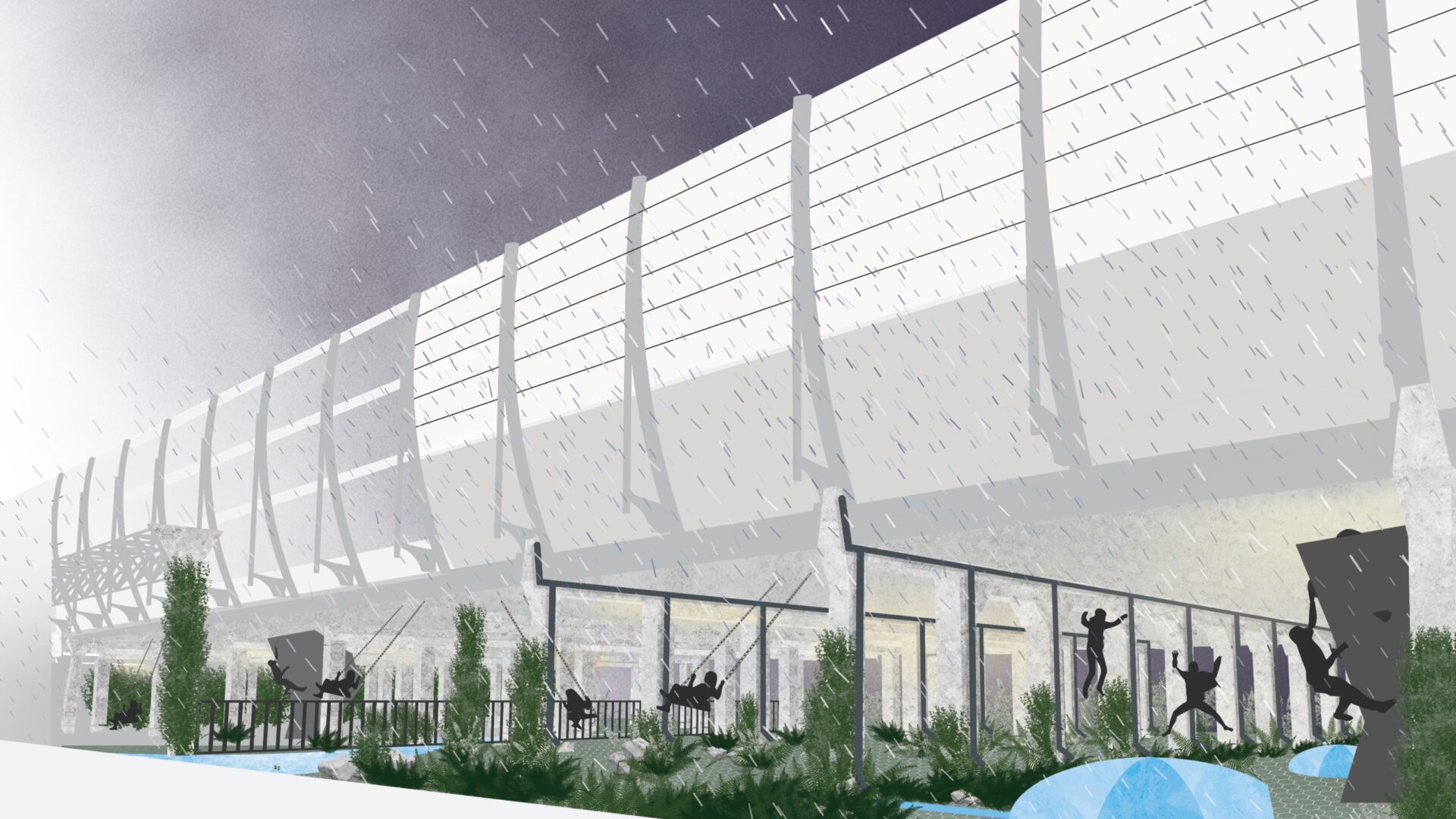 A new vision for unused space under viaducts

What will the meeting space of the future look like? With this question, Sweco, Europe’s largest architectural and engineering firm, participated in the What if Lab: Well-being in the City in 2021. Of the diverse ideas submitted, a five-member panel chose the Shadow Spaces concept of Studio 1:1 in Rotterdam. Shadow Spaces introduces various elements that transform the unused space under viaducts and covered areas into places for sports, games, social encounters or shelters.

Title of the Lab: Well-being in the city
Design question: What if…. our public spaces feel like home?
Client: Sweco
Designers / design studios: Studio1:1
Period: May 2021 – October 2021

As demand from customers for the redevelopment of urban areas has increased, Sweco has noticed that the current layout of cities no longer meets the needs of municipalities and their residents. Lonneke Wijnhoven, Director of Communications and HR at Sweco: ‘To find real solutions for this challenge, a new way of thinking is needed. From people who by their very nature tend to think outside the box and look beyond set patterns. By participating in the What if Lab, we wanted to stretch our own horizons.’

In this case, we were not looking for a solution to a local problem of a particular city or square. ‘Our approach was therefore thematic,’ says Lucas Zoutendijk of Studio 1:1. ‘We took the time to research relevant information: we analysed figures from Statistics Netherlands, read scientific articles and looked at reports such as the Climate Impact Atlas. This revealed that the population will grow in the coming years and most people will move to the cities. As a result, pressure on public spaces will increase. At the same time, the use of that space by various target groups with different needs is growing.’

Studio 1:1 also went out and about in the city and the outlying area. Zoutendijk: ‘We found that during the pandemic, covered areas were being used more. We saw families celebrating birthdays under a viaduct, personal trainers instructing sportsmen and women under bridges. Meanwhile, the effects of climate change have been found to hit urban areas hard: due to building and paving, these areas are warmer and drainage from surge rainfall is less effective. The unused covered areas became the starting point for our concept: Shadow Spaces promotes social encounters and at the same time offers opportunities for climate adaptation.’

Part of Shadow Spaces is a catalogue of different applications for social and ecological interventions. An area analysis provides insight into where the covered areas are located in the city and whether there is any heat stress or flooding. The analysis also shows whether neighbourhoods need places for social contact or whether it is play facilities that are needed. Zoutendijk: ‘Every covered area is different, so site-specific needs must be considered. In a neighbourhood with many families, a play area is a logical addition. This can be created by using elements such as swings on the concrete ceiling or a bouncy castle that doubles as water storage’.

Shadow Spaces was initially developed for Rotterdam, but can be adapted for other cities. Wijnhoven: ‘This scalability makes the concept widely applicable, which was the decisive factor in the choice. From large to small covered spaces, for exercise or for greenery. In addition, it makes use of existing buildings that provide shelter and shade. It doesn’t put anymore pressure on the already scarce public space in the cities.’

In the run-up to Dutch Design Week 2021, where Studio 1:1 presented Shadow Spaces, there were several sessions with the What if Lab team, Sweco and the designers. Zoutendijk: ‘Interim presentations were held every three to four weeks. This meant that the frequency with which we presented our progress was quite high. This was particularly intensive in the first half when we were fully engaged in research. At that point, there is no concept yet, but you want to come up with a solid pitch at such a meeting, and show that steps have been taken. That’s not always how a design process works in practice.’

Despite the fact that interest has been shown in Shadow Spaces since delivery, no concrete implementation has taken place so far. Wijnhoven: ‘Sweco is a consultancy firm and therefore does not have its own development budget for autonomously setting up projects. We hope to eventually launch the concept with our customers. We can, however, act as a matchmaker. With 175 000 employees in nine countries, we offer designers a large network.’ Both Sweco and Studio 1:1 advise prospective participants to express expectations about any actual execution of concepts in advance.

In 2022, Sweco will participate in a second What if Lab, Totally Local. In doing so, we make use of the experiences we gained in our first participation in the event. Wijnhoven: ‘In putting together the panel that chooses the winning concept, we looked for experts who have the capacity within their organisation to help with any possible implementation. Moreover, within Sweco, the project has been assigned to project managers who have more insight into commercial execution. For Well-being in the City this was the communication department, which has an advisory role.’

Structure of the sessions

The frequency and content of the sessions in the run-up to presentation at the Dutch Design Week may not run parallel to the design process. The route to delivery is filled with continuous meetings, which social design research is not always in step with.

How do both parties see the follow-up process and how can they help each other? Stating practical options for the actual execution of a concept or product upfront creates clarity in expectations for both the customer and designer.

Where responsibility for the What if Lab is placed within the customer’s organisation, can affect the realisation of the concept. Is this a department that has an advisory role or a team that can also mean something during implementation?