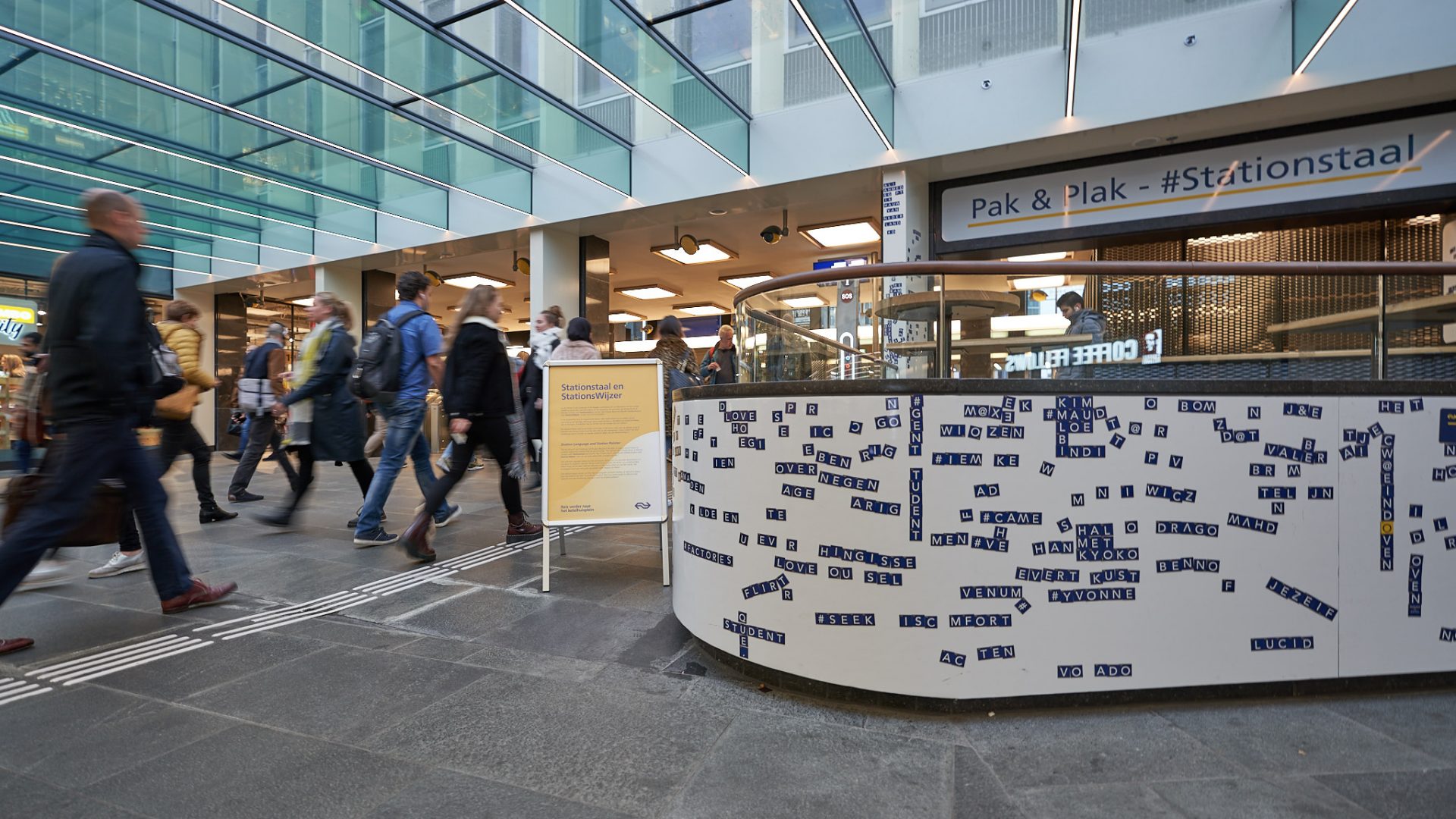 The language of the station

Stationstaal as a remedy for waiting

Waiting on a train station. Every passenger experiences this to a greater or lesser extent. Some people are better at it than others. Ten minutes can feel like an eternity while waiting. What if we came up with something that could entertain and connect those waiting travellers, Wouter Corvers and Bouke Bruins wondered. During Dutch Design Week (DDW) 2018, the two designers who graduated from Design Academy Eindhoven, tested a letter game as a remedy against waiting at Eindhoven Central Station, as a place for spontaneous interaction and as a platform for literary talent.

In search of a new experience that would meet the needs of the traveller, the inventive designers came up with a fitness machine, a travel game and fridge magnets. The three ideas were tested directly on the end user, a method that is typical for the two designers to gain new knowledge immediately. In their search for playful solutions for public spaces, they combine a proactive attitude, a social ‘research through making’ approach, their gift to get in touch with the users of their designs and often also humour.

They went out like some sort of design interventionists, armed with 65,000 magnetic letters. From a central point, a so-called Taalcorner (ed. Language corner), train passengers could make words and phrases with letters of their choice and stick them to corners and steel poles at the station. Every morning, a different language expert provided the kick-off. Bouke and Wouter then examined the texts. This gave them a good idea of ​​how the language of the station developed day by day.

From letter thief to poet

‘While testing, we noticed a connection between the letters, the station and the travellers,’ says Bouke. ‘There I was again as an undercover agent observing and learning how language fanatics handled our experiment from the coffee place opposite the Taalcorner. How do families, acquaintances or strangers play, share, laugh? How do they connect with one another?’, they wondered. The designers saw that slowly but surely the letters started to attract attention at the Taalcorner, the waste bins in the corridor and the H-profiles on the platform by both DDW visitors and casual passers-by. They all meet one another: subtle letter thieves, clever Scrabble players, local city poets and young rappers actively shared their passion for language. Amongst them writer, comedian and linguist Wim Daniëls, rapper and performer Bryan van Belzen (aka BRAZ), poet Arnoud Rigter, travellers and waiting visitors, who all expressed their thoughts about daily concerns, global social challenges or their love for language.

The station as infinite canvas

To test their ideas quickly and effectively with the end user, Wouter and Bouke first placed the fitness objects at the station during a hot summer day. Over a six-hour period, they experimented on different locations and with different methods. Nobody started doing real work outs. Only a handful of people started doing some exercises, but most of them were NS employees themselves. It turned out to be too hot for sports activities. “However, the responses were good. Most passers-by took a photo and thought it was fun,” says Bouke, “but that was not the goal. The aim was to connect and entertain.”

Then they chose travel games to connect travellers together, a smaller action that would make time fly. Connect four, Noughts and crosses, and Dots and boxes, were prominently placed in various locations at the station: in waiting areas, at ticket machines, on the platforms or in the walking routes. But travellers did not play, at least not within the desired framework. The games did not stimulate interaction with strangers and caused little wonder. Mobile phones were still the most attractive toys.

The designers wondered how they could offer a game within a minimal framework, using the station’s unused surface as a canvas. They found a game that requires a small action, can easily and anonymously be executed and is attractive and inspiring for both yourself and others: magnetic letters, with which a loving phrase, food for thought or a poetic text can be made for your fellow traveller. By using magnetic objects such as the station’s steel construction, the H-profiles and the banisters, the canvas is infinite and offers opportunities for a diverse audience to post, share or change something.

The results? Stationstaal (ed. Rail talk) was used intensively by experienced language virtuosos as well as waiting travellers who enjoyed posting a sweet word for a loved one, a message for a fellow traveller, or a poetic text for a family member. It was used by parents who thought of it as a playful way to teach their children to read, and sometimes it was a used for advertising. Occasionally, Stationstaal was used for cursing, which was corrected immediately. The words were widely shared online through photos, tweets and Instagram posts. Spontaneous searches for letters started and it brought – sometimes lonely – travellers closer together. The 65,000 magnetic letters at Eindhoven station provided plenty of creative ‘station language’ and interaction. Mission accomplished.

How does NS look back on Stationstaal?

For NS, Stationstaal has proved a valuable experiment in the context of its main mission: to achieve high customer satisfaction. During DDW, NS conducted research that led to a number of valuable insights. “Stationstaal appealed to both young and old,” Maartje Beerens, Customer Experience Manager of the NS explains. “Because people were busy engaging with Stationstaal, they stayed at the train station longer, the connection between people was strengthened, and the texts offered inspiration for taking and sharing photos or finishing a poem. That’s exactly what we hoped for,” she says. Despite the fact that it is not the right time now, in the long term the ambition is to permanently place Stationstaal at railway stations across the Netherlands. “But for that, more research is needed,” says Beerens. “We are very much looking forward to the insights that the designers may already have in September from two metro and bus stations in the American city of Atlanta during a new test of ninety days. Despite the cultural differences, it will certainly result in interesting comparable insights.”

#RailtalkATL is the follow-up of Stationstaal implemented in the American state Georgia. In June last year the designers initiated the research project in collaboration with the Atlanta Design Festival and MARTA’s Artbound (a public art program of the Metropolitan Atlanta Rapid Transit Authority Act (MARTA), which should make metro and bus stations more attractive and fun for travellers by turning stations into destinations in themselves using art, theatre, dance and live music). During the nine-day design festival, #RailtalkATL was used in two metro and bus stations: Midtown station (shopping and business area) and West End station (residential area). Like in Eindhoven the aim was to enhance the joy of waiting while travelling, stimulate spontaneous dialogues with stangers and offer a platform for literary talent.

It worked. Passengers sometimes let a train pass to finish a sentence or conversation with a fellow traveller. Frequent travellers often added something to what they had already posted before. Naturally the comparison with Eindhoven is also interesting: in the Netherlands people generally play with words and like to show their literary talent. In Atlanta, #RailtalkATL was a medium to discuss social and religious subjects. The space was transformed into a large autonomous community whiteboard that was taken care of by all.